I take notes to fight them.

I write them down on paper and record them on smartphones.

I dream about future people discovering them in the ruins of my house.

About aliens coming from the space just to retrive the last piece of "SpiritoGiovane"'s collection in his Hidden Lair.

I wonder what they would think about me (let me know at spiritogiovane@gmail.com).

Welcome to my digital repository.

I hope your future-man/alien-born mind can be blown away by its content and that, in some way, it could help you save your world! 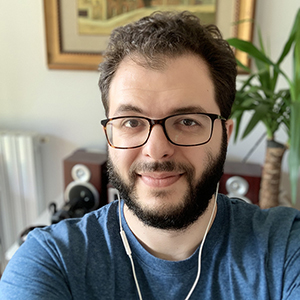 I was my own super hero: "student by day, game designer by night".
It was a blast (with some nightmare in the middle).

Nevertheless, I endure my enemies — among them, Doctor Bloodyexams, The Teaching Baron, Mr. Doomlife. This experience was DAMN, so useful in the adaptation and translation of Pigsmoke. More in a minute.

To fight them all, I built a secret base in the depths of the web: Storie di Ruolo. Along with my fellow superhero Edoardo, Ivan, Vanessa, and Francesco, I wrote about tabletop RPGs and restore the quiet in town.

And it was during those night, full of spandex and papers, that I finally succeed — I published a tabletop RPG! I wrote "Nights of Nibiru" (Acchiappasogni, Red Glove Edizioni), an Italian Tabletop RPG about human shapeshifting into animal form on a distant, dreamy planet.

After that, my nights as a vigilante became my secret weapon. With the Storie di Ruolo team I started translating games from English to Italian, fighting the sinister Smallmarket — he wanted to keep Italy in the dark from foreign games, a real scoundrel! We translated Big Gay Orcs by Grant Howitt, Kintsugi by David Schirduan, Shipwreckers by Games From The Wild Wood, and many others... until the Space Orange 42 Squad reached out to us to help them bring to life the Italian edition of Pigsmoke by Chris Longhurst.

And now I'm facing my biggest enemy, may archenemy, my ultra-nemesis: the GAME DESIGNER LIFE. Since his appearance, the GDL conquered a big part of the city I protect. I must retrive the legendary weapon to slay it. To do so, I needed help from my old team & new superhero — but these are other stories, this is the run of "Storytelling Mercenario"...