DEATHSOURCE is an Old School Atmosphere roleplaying game about young, mortal, supernatural undertakers in a world of pestilence and illness.

Eldur is a grimdark fantasy world shattered by a furious war between the Demons, an unknown entity called the Gorge, and the medieval kingdoms of the Celtar League, with the help of fairy kins on each side.

Years after the War of Bloods, the lands of Eldur rot among mountains of bodies, forests grown upon mass graves, illness and viruses brought on the world by the defeated Demons, ghosts who still wandered on the planet after the closing of the Planar Gates.

Play as young, mortal Undertakers or Tanatos'ener who try to accomplish Errands and not to succumb to the danger of this weird world. Enlist as a member of the powerful Tanatos Guild, walk upon Eldur facing unknown horrors and helping out people in the meantime.

Choose your Kin between the few remaining Humans or other Fairy Kin. The Halfbreeds children of Humans and other races. The Dwarves, who split up in the past between Interventionist and Neutrals. The full-of-regrets Elves who are dangerously twiddling with genetics. The Leprechauns, who betrayed mankind during the War. The Orcs, who betrayed the Demons Lord and sided with humans. Or the Hellspawn's, perhaps born from human dark rituals or incest between humans and demons.

Get yourself into actions, exploring corpse dungeons, or into politics, dealing with Bishops, Bailiffs, and Chancellors.

Help Alchemists and Wizards to discover a new way to avoid pandemics — or enhance pestilences. Get yourself into trouble dealing with Death Sources, ghosts, or other remnants of the War of Bloods.

If you are lucky enough you may live through it all and become, one day, a Crusader or a nightmarish Exorcist.

DEATHSOURCE uses a new system, specifically developed for this game, that we could call Above/Below. It uses a d20 and a bunch of cards, the DeathSources, which are at the same time weapons, source of dangers, and precious artifacts.

We are now into an alpha-test phase, with a stable Character Sheet (already available and upgraded) and a Cheatsheet (a short version of the rules) of which you can find the Setting Presentation in the downloads.

You can download the game files for free — what I'm asking in return are feedbacks and comments. :-) 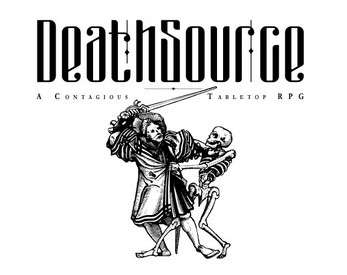