RINGER is a cyberpunkish game inspired by the 2019 #Inktober!

You live in a society shaped by the RING (uppercase), something that changed your life. It could be a technological marvelous, a secret organization, a NASA prototype, a isolated community, or a widespreaded cult. You will decide it during the game.

In this society, some people have access to particular things — such as power, techs, or abilities — called rings (lowercase). This makes you a Ringer. Each of you have a Purpose and a Hope or a Fear that will guide your step into the future.

A future that is threaten by a mysterious shadow. It could be something that will change the RING's society forever — or will lead it to a renewal.

Will you be strong enough to face the shadow?
Or the shadow will crush you and the RING?

RINGERS is a masterfull story game experiment, written to stay inside a 64 deck of square cards. As you reveal cards from the top, the game guide you into the story while teaching you the rules. Each card can have one or more different Functions to help identify their effects.

To play RINGERS, you need:

A bit of history

Last year, I had the unhealthy idea of participating in the Inktober challenge by creating a one page game per day.

My attempt lasted 21 days, after which I became ill and was unable to finish it all.

This year, I promised myself to celebrate the Inktober — which I have always admired and loved — with something more contained and less demanding: a single game, inspired by one of the 31 words.

I thought a lot about which one to use and the first one, "Ring", triggered the right gears inside my head.

The game is a prototype: this means that it requires additional playtests and a bit of editing (English being not my first language), but for now it has proved to be quite solid.

Anyone interested in giving me feedback will be added to the thank you card. You can write feedback by commenting on this game or by sending an email to: storytellingmercenario@gmail.com. 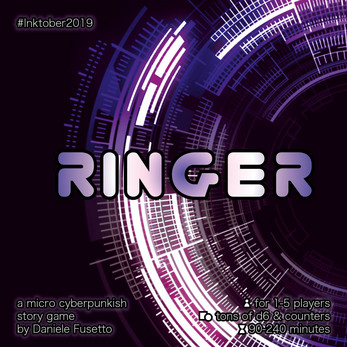 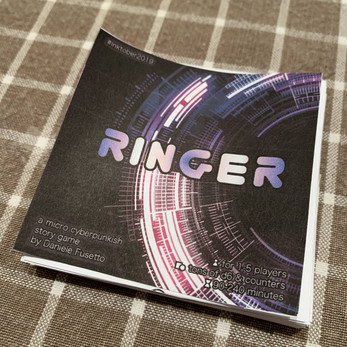 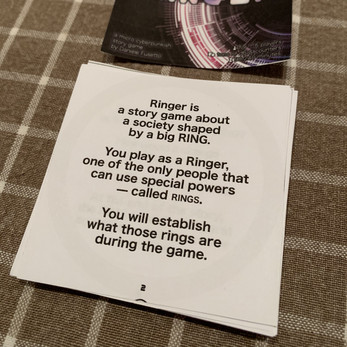 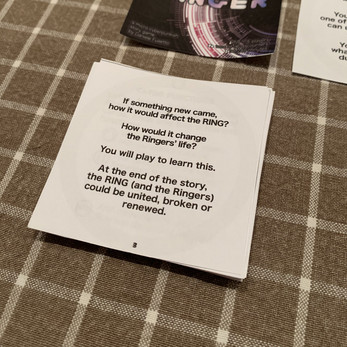